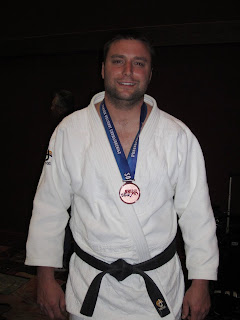 Over the weekend Blaine and I traveled to Dallas, TX for the Dallas Open Judo Tournament and President’s Cup.  Blaine’s, +100kg division, was populated with 13 hungry heavyweights, most of whom were as big as or bigger than Blaine.

During the two events, Blaine proved the old adage ‘that which does not kill you makes you stronger’. Blaine’s movement and form were off. In spite of the lack of normal form, he persevered, and captured bronze in the +100kgs in the Dallas Open and Presidents Cup and the Open weight Silver. The two medals from the President’s Cup bring Blaine’s total national medals to 5. I suspect that he has a few more to earn.

Congratulations Blaine! You provide a shining example for the Hollis Park Judo Team.

Below are the videos of the Irwin Cohen Memorial Tournament 2015.

Stefan Habsburg in white - lost due to injury

Report from Coach George Weers on our team's performance at the tournament yesterday. Way to go team !

Hollis Park Judo was, heavily, represented at the 2015 Irwin Cohen Memorial Judo Tournament. This year our team of players consisted of one 90kg, Stefan, two -100kg, Joe Taylor and Aaron Prosser as well as Blaine at  +100kg. For Aaron and Joe it was their first experience at a National level event and they comported themselves well.

Aaron faced a, more, experienced opponent in a, two-out-of-three, situation, which provided a valuable bench-mark for Aaron’s future development.

This event was Stefan’s first venture into the -90kg division. In his first match, Stefan faced a visually impaired (VI) athlete who was able to match Stefan’s ground play skills, tit for tat. It was a very entertaining match, over which the VI player was able to persevere with a small score. Unfortunately, Stefan tweaked his knee in his second match.

In a bizarre twist of bracket bungling, Blaine dominated the +100kg division. Blaine’s superior footwork, grips and  transitions made easy work of all comers. The Cohen’s event served as a good warm-up for Blaine’s trip to Dallas and the President’s Cup next weekend.

I would be remiss in not thanking our support group of Natalie, Marisa, Melissa and Julie. Their efforts in soothing boo-boos and bolstering egos was an invaluable asset.

Congratulations to all! You have upheld the reputation of Hollis Park Judo and provided your Coach with great pride!

Happy Veterans Day to some of our favorite judo peoples. Coach George Weers and his wife Marie have spent their lives serving our country in the airforce. Coach Dave Bleeker has spent his military career in the army. And Trent Williamson has defended our freedom on tours overseas with the army. Thank you to each one of these amazing people.

(If anyone knows any of our other team members who have served, please let me know!)

Size Is An Illusion

Ok, maybe not. Maybe size does actually matter. But being small should never be an excuse. It's simply a challenge.

As many on our team are out for various reasons, those who show up must sometimes be paired with a slight size difference. This Thursday was one of those nights. But working with someone of a drastically different size can open up a whole new world of learning. The smaller opponent realizes that he can, indeed, throw a bigger opponent with the right technique. And the larger opponent is forced to practice his control in throwing (so as not to smoosh his friend). It's a win-win learning opportunity for both.

Below are some pictures from class. 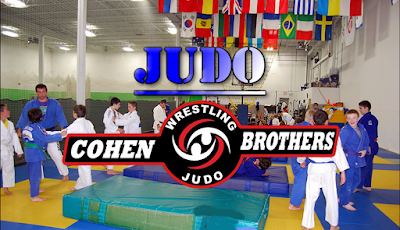 Coming up November 14th is the Irwin Cohen Memorial Tournament. So far from our team Stefan Habsburg, Natalie Habsburg and Coach George Weers will attend. See our 'Upcoming Event's' page for more details.

http://hollisparkjudo.blogspot.com/p/upcoming-tournaments.html
Posted by WCI Judo at 2:42 PM No comments: