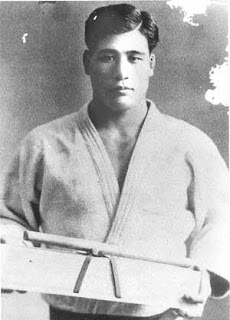 Masahiko Kimura is a Judo legend. At 14 years of age he had attained the rank of Shodan, by the time he was 17 he was a Yodan and at 23, Schichidan. Keep in mind that his rank was earned, primarily, by defeating other candidates for the ranks being sought.

In 1937, at the age of 23, he became All Japan Champion and retained the title for four years, at which point World War II began. The 1950 All Japan Judo Championship, a long and arduous Championship Match, during which neither opponent was able to demonstrate superiority, resulted in Kimura and Masahiko Ishikawa being declared co-Champions. This brought Kimura’s record to, an unprecedented, Five All Japan Titles and spawned the adage “Before Kimura there was no Kimura. After Kimura there will be no Kimura”.  His record of consecutive titles was intact for, over, a quarter century.

During his career Kimura Sensei was also renowned for his Spartan attitude toward training, such as 1000 Push-Ups daily. He also developed unique methods of improving his strength and skills. Mr. Kimura performed Uchi Komi on a pine tree. He tied a rope around the pine and proceeded to attack the tremulous trunk with hundreds of Seoinage, ostensibly, attempting to up-root the poor pine. Legend has it that the pitiful pine perished from Kimura’s abuse.

Mr. Kimura practiced his Osoto Gari in a, no less, dynamic manner. He began by placing a candle on the mat and pantomiming his Osoto Gari action until the force of his sweep extinguished the flame. He then progressed to a candle to his front and one to the rear. Again he practiced until his action extinguished both candles. He, progressively, intensified the challenge until he could extinguish ten candles at a time!

His intensive training earned him the ability to and reputation for rendering opponent’s unconscious with his throws.

Kimura Sensei’s innovation and dedication should be inspiration to all serious Judoka. Through hard work and use of common items he developed his stamina and skills to, unprecedented, levels. He thought outside the box and became a legend.

So what can you do outside the box? All you need is the floor for Push-Ups and everybody should be able to find a piece of rope and a tree, or pole, to perform Uchi Komi. Games like soccer and hop scotch are useful in developing foot work.

What else could we do?

When I was young, we had a dog that liked to play tag. She chase us and try to catch our legs. It became a game of balance and foot work to avoid being ‘tagged’.

I’m certain we could incorporate cats in our unorthodox training. Cats are notorious for winding in and around peoples’ legs. If you’re not careful you can step on, or be tripped by, the cat. We may be on to something here!

Taking a page from Kimura Sensei’s candle progression, we’ll begin with one cat, in a room, and see how long we can last. We can add cats, and/or people, until the room is full and locomotion becomes laborious. For an added challenge we could tie catnip to our ankles! Catnip would, surely, prompt playfulness from our furry friends. Cat food could also be smeared on the ankles but I fear that a feeding frenzy might render the objective fruitless.

There’s your challenge! Think outside the box and develop your own unorthodox training methods.

Right now, my cats are waiting.

Coach George Weers
Posted by WCI Judo at 6:17 AM